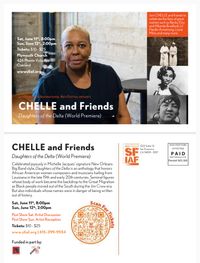 DAUGHTERS OF THE DELTA PROJECT

Featuring CHELLE! and Friends and CHELLE'S Juke Joint! Celebrated joyously in Michelle Jacques’ signature New Orleans Big Band style, Daughters of the Delta is an anthology that honors African American women composers and musicians hailing from Louisiana in the late 19th and early 20th centuries. Seminal figures whose body of work became the backdrop to the Great Migration as Black people moved out of the South during the Jim Crow era. But also individuals whose names were in danger of being written out of history.